When I also came across a video about Soliloquy, made by the good guys Matt & Dan @ Slocum Studios, I just had to give it a try.

I’m always interested in finding and using the ultimate tools to get my work done, I of course had to challenge SlideDeck 2 to see if Soliloquy could be a worthy supplement to my toolset, or even *good golly miss molly* a worthy SlideDeck 2 alternative. One can always hope…

I’ll tell you my results, but first you can watch the good Slocum guys voice their take on Soliloquy:

The Features page didn’t give me a clear indication of the various types of sliders offered by Soliloquy. I had several questions: Can I overlay text? Can I make a featured content slider?

The video demo on the Features page didn’t help me much: It is an audio-less, silent YouTube 360p resolution video. 360p for F’s sake!

So as if it wasn’t enough that I can’t see what going on in the blurry 360p video, it happens fast, and I don’t get any narration telling me what’s happening. See for yourself:

The Showcases section is sparse, not many showcases. I visited them all, and many of them are quite underwhelming. Not sexy. Not showcases that make me wanna go buy Soliloquy.

The Soliloquy pricing is fair enough. Especially compared to SlideDeck 2 which I recently reviewed.

You can always upgrade from the Single to the Developer license, paying just the difference.

Anyway, I felt courageous, went ahead with my purchase, quickly downloaded and installed the Soliloquy WordPress plugin.

Upon entering the plugins admin section, I realised that Soliloquy is by no means a user friendly plugin. What makes me say that? Well, have a look for yourself: 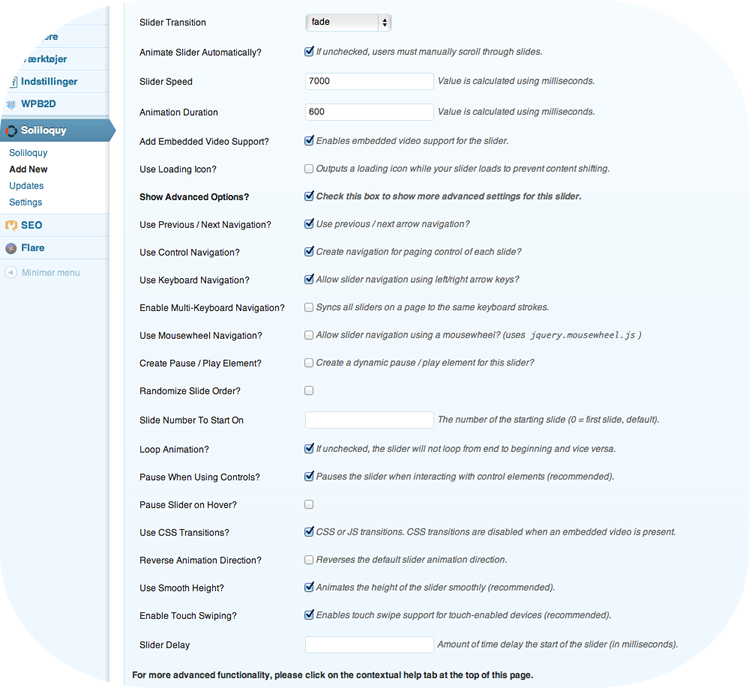 To you it may look simple enough. To me as a web designer, with a passion for simplicity, I find such a big pile of ungrouped settings rather intimidating. There’s no visual hierarchy as to which features logically relate to each other.

That admin UI confusion continued when I tried to figure out how to use videos in my slider… I may be dumb as a rock, but I can’t make sense of this: 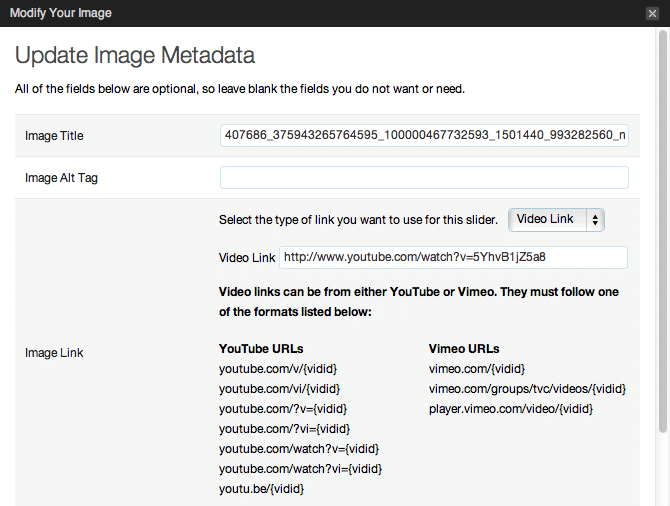 Why do I have to specify an image title and image alt tag for a video? Why is is a video link? Am I linking an image to a video? I don’t get it.

Of course, this isn’t rocket science, and with a little effort, I’d get used to the Soliloquy way to make WordPress sliders.

Why make life harder, when a little more thought on the behalf of the developer, would save me lots of wasted brain energy searching for the right settings to alter, to achieve my desired end result? That’s the beauty of design: It can make life simpler. Design can make life better. That’s why I love design, and find it to be so interesting and important to society as a whole.

SlideDeck 2, which I reviewed in a recent blog post, might be a bit bloated and a rather heavy meal for your web server, but design wise (!) SlideDeck 2 is miles ahead of Soliloquy! It shows through in the product that SlideDeck 2 is a product by Digital Telepathy, a very innovative design lab / software creator.

Soliloquy is indeed MUCH MUCH faster than SlideDeck 2 though! Have a look at this actual strace command I ran via SSH / terminal on my hosting account at Media Temple (read my Media Temple (gs) review here): 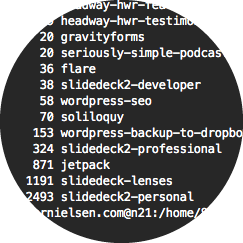 Check out the enormous difference between SlideDeck 2 and Soliloquy! Thumbs up to Soliloquy when viewed through my pink-tinted speed glasses:-)

Do I recommend Soliloquy as a good go-to WordPress slider plugin?

To each his or her own. I see that Soliloquy has some qualities, namely speed. But I honestly wasn’t too impressed with the UI or overall capabilities. At least not when I already have SlideDeck 2, which has a much bigger feature set, and 2000% more sexy UI:-)

PS: It’s worth noting that Headway (my favorite WordPress theme framework) has a simple, responsive slider built in! And, as I wrote in my recent SlideDeck 2 review – both Genesis and PageLines (Headway’s two best competitors) also has sliders built in (Genesis via free plugins, in PageLines they’re built right in).

Don’t get me wrong, you’d want a fast WordPress slider plugin. It’s just that I find Soliloquy offers very little. WordPress image sliders. And maybe with videos (couldn’t wrap my head around that one. When I need more than what’s built in to the theme frameworks I use, I need the slider plugin to offer more power and flexibility than Soliloquy does.

And hey – I also have clients to consider in the above usability equation. While I (as a web design nerd) may be able to figure out how it works, I can attest that pretty much ALL of my web design clients would be unable to use Soliloquy. But that can use SlideDeck 2. Barely.

A few other issues with Soliloquy

Without going into too much detail, I wasn’t happy that my two emails (sent via different channels) asking for a refund went unnoticed and required tweeting the developer to get his attention. I did get the refund in the end. It’s just that I’m of the opinion that refund requests needs to be handled swiftly because as the customer you rightfully feel like having spent money on something you wish you didn’t. Until the money is back on your account, you feel they flying out there in cyper space.

I had trouble finding the developers business information details anywhere on the SoliloquyWP.com. website. That should be a minimum requirement for anyone doing business online. I essentially wanted to know whether I was buying from a European, US or whatever other situated business. I need to know that, for accounting purposes.

I never received a proper invoice either. I asked for one that included my VAT number. Again, a requirement by the authorities, so yes, I really need it since I’m asking for it. Never got such an invoice though. Had my refund and decided to let it go.

The Soliloquy affiliate program didn’t require approval either. That’s not a good sign. Indicates that the quality of promotional partners isn’t all that important to the company. That can lead to dubious, spammy reviews, pushy AdWords campaigns etc.

It all boils down to an image of sloppy business practices. Always trying my best to be responsible to my surroundings and customers, I feel disappointed in an experience as the one described here, if looked at holistically as a whole.

All that said, I actually do believe Thomas, as the developer turned out to be named, is a nice, decent and fair enough guy. He may just be a bit too busy. But aren’t we all?

I somehow feel a little bad mentioning these specific business issues here. But I do so because authenticity is a key life value of mine, and it’s important for me that I share the full picture with you, since I’m linking to Soliloquy and want you to have the full facts, should you decide to buy. Who knows, you may find Soliloquy is the perfect WordPress slider plugin for your needs.

Feel free to voice your opinions and experiences with WordPress sliders in the comment section below. Your questions are welcome as well!