RescueTime is one of the world’s absolute best productivity apps. Still, imagine it also had a Productivity Challenge feature – motivating you to be more productive at work?

As a solopreneur, a singular entrepreneur, a small business owner if you will: I need all the help I can get, to be more effective – be more productive.

All to the detriment of creating meaningful, memorable, engaging high-quality content that makes a difference to your audience (by being original and helpful) as well as steering your ship on a strategic course towards the life you want for yourself and those you love.

As a chronic task switcher, I don’t need “time management” – I need self-control. Time-control – to focus on the single task at hand. Not “everything else”. And certainly. not. Facebook. Right?

If you’re a freelancer or solopreneur, I’m guessing you can relate well to this.

Tracing the invisible ink of my procrastination

As a result, I’m on a perpetual quest to be more productive and effective. For years I’ve been on a Bear Gryll-ish manhunt for the definitive, true answer to vital questions like:

To find absolute, objective, true answers to such questions, I began tracking myself. Tracing the invisible ink of my procrastination. Illuminating my habits. The good, the bad, and the ugly ones. I wanted to identify and break bad work habits. Assasinate them. At dawn. No wait… before dawn. Yes: it was that kind of manhunt.

At first, I wrestled with tracking my work manually. For some it might work, but to me, it’s always been a doomed endeavour from the get-go: manually tracking what you do, when you’re not really aware what you’re doing it, feels counter-intuitive. I’d always forget to write down what I had been doing. Setting alarms? Si si señor, but they’d always go off at the most inconvenient times. No matter whether you’re productive or procrastinating, you wanna keep doing what you’re doing – not grabbing pen and paper, or switching to Google Calendar, to log what you were doing.

I needed something more automatic.

What about a time tracking tool then?

I googled “best time tracking tool” and found The Pomodoro Technique, a time tracking tool based on the agile software developer concept of timeboxing but crankin’ up your productivity a level or two, by taking timeboxing a few steps further. The Pomodoro Technique has proven itself to be a huge productivity booster, specifically a great focus booster, to myself – and many other people/procrastinators:)

(Sidenote: I’ve often wondered what “needing to pee” should be classified as… In a way, it’s an “internal” distraction, while on the other hand it’s not your fault, making it an external distraction… Anyway, if you know, please share it in the comments!)

Pomodoro isn’t a perfect method, though. As I’ll explain in an upcoming blog post, the Pomodoro Technique can be deceiving and downright detrimental to your work habits and in turn: business success!

I still needed a more automatic way of tracking my time.

The Quantified Self of Narcissus

I even considered putting up video cameras, to record myself. While it does (admittedly) seem like a somewhat Orwellian, Truman-Show’ish, and… yeah okay… downright weird thing to do: it could’ve worked well, aside from the “tiny” caveat that one has to wade through and analyze all that video footage. When would a busy person have time for that? Only a dude like Narcissus would… 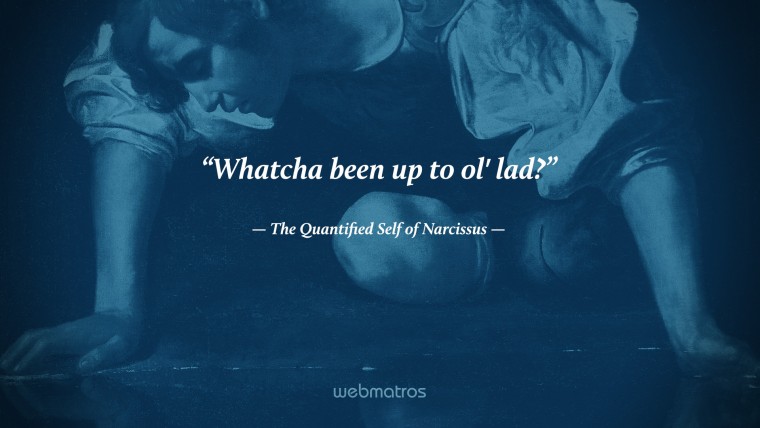 The conclusion? Manual self-tracking doesn’t work. It has to be automatic.

Enter the Wonderful World of Fitness

Often, when showing my Basis Peak and now Fitbit Blaze fitness watch (or “health tracker” as I call it) to a family member, friend, client or casual acquaintance; the reply is often something along the lines of “well, I can track my steps – walks’n’runs’n’whatnot, with my phone… I have this app (insert: Runtastic, Endomondo, etc) … so I don’t need a wristband for that…”

But the difference is huge! The fitness tracker is ever-present, always ready, tracking your activity 24/7, automatically. No need to open an app and manually tell it that “I’m now going for a walk”. This means every. step. counts.

It also means you can’t lie to yourself. You can’t mumble “I’m an active person… always been!” when in fact you’ve just spent three days in a row mostly sedentary. Comfortable in your couch, laptop on your lap, with a pulse that hasn’t been above 100 BPM, for… a week now? Two? Who knows?

You don’t – unless you track yourself.

The point here being that most of us lie to ourselves, on a daily basis. And especially about our activities: what we do, why we do them, for how long, and how active/productive/healthy we are.

Tracking yourself gives you objective measures, metrics that mute your inactive/unproductive/unhealthy inner dialogues of self-deceivement.

As you could read in my Peak Brain Score blog post, I’m a big fan of such self-tracking. I strongly believe the quantified self movement is here to stay: it’s the future of health… and likely also productivity!

Challenge yourself
– with a little help from your friends

Last week, Friday at 2400 hours midnight, my partner Heidi and I, finished our second round of “Workweek Hustle” – a Fitbit Challenge.

Fitbit is one of the world’s most popular (if not the most popular?) fitness tracker brands.

What sets Fitbit apart from competiting fitness trackers like Jawbone and Garmin, is their mobile app. It makes fitness fun.

Some of the ways Fitbit “funs up” fitness, is with great Goals tracking, friendly Reminders – and Challenges – all wrapped in a colorfully gorgeous UX design.

Fitbit Challenges lets you challenge one or more of your friends to join you in for example a “Workweek Hustle” or “Weekend Warrior” challenge, where you try to walk (or run) more steps than the other challenge participants, during the workweek or weekend.

Motivated to Move… and Work?

Let it be said: I felt extremely motivated to move during these Fitbit challenges. I’ve found myself on early morning walks, not at all minding the inevitable rainy, dark gray weather we have here in Copenhagen this time of year. And even on long walks, way past midnight. Just to get those steps in.

And Heidi? She was even more active and motivated. One of the reasons I walked around in the middle of the night, was to have a chance of beating her manically soaring daily step counts.

And that says a lot about the motivational value of such challenges. Heidi was a reluctant Fitbit rookie, when my unrelenting persuasionary efforts finally paid off, leading her to “bite the bullet” and order a Fitbit Charge 2.

Walking’s fine… But what about *working* fine ??

While walking last week’s Workweek Hustle (which I won this time btw!) I began wondering. A question emerged, and I kept pondering and pondering:

Why am I not exhibiting this same amount of stamina and “winner mentality” when it comes to my work goals and initiatives?

I’ve tried again and again to use an editorial calendar for my blogging workflow, yet it has never, ever paid off.

Maybe it’s because there’s no direct, immediate penalty or punishment for not adhering to it. Or maybe it’s because the immediate rewards are too low. But really, what I want more than anything else in life; is publish my thoughts. And I am committed to it. Every day I start work, with great intent.

But I’m stone cold – as ice (before global warming) – to passing deadlines of “should be” published blog posts. Despite all my good, solid intentions.

Perhaps it’s because of distractions. Doing all the “other stuff” that also “needs to get done”. I honestly don’t know.

I just know that I felt a lot like walking, during those Fitbit Challenges.

So perhaps it was the accountability? Or the reward of winning… ? Even if it’s a “prize” as fluffy as this: 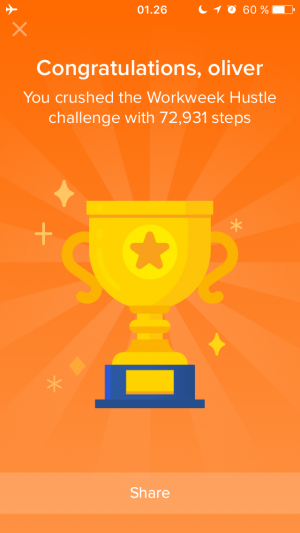 Sometimes I’ve even considered drastic measures. Like f.e. setting my draft blog posts to be auto-published, when they’re due. Fortunately, I know myself well enough that I will forget all about half-finished blog post drafts, due to a phone call or some other random distraction, leaving me with a published (and automatically aggregated and distributed) half-finished blog post, in turn making me wanna bang my head against the wall.

I’ve also considered something like Beeminder – but it would likely just ruin me:)

It’s not that I lack discipline, nor motivation. I have plenty determination.

Hard to explain what it is about these “gamified” challenges, that make them so appealing, to our brains.

Perhaps it’s the accountability? To get things done To beat our own laziness? I don’t know.

But it got me thinking!

The Fitbit app has a feature called “Reminders to Move”. You pick a span of hours in which you wanna move at least 250+ steps, each hour, every day.

I’d rather have reminders to… Sit down, Shut up… and Work!

Me being on the ADHD / attention deficit hyperactivity spectrum, I’m in much bigger need of a “sit yo’ hyper-ass down, shut up and WORK – in a focused manner – for 60 minutes each hour, every day… mottafucka“ reminders, rather than reminders to move which I feel’s more a feature targeting slouchy couch potatoes.

That led me to a great idea!

Productivity Gamification (in the form of Challenges)

Obviously, Fitbit isn’t a productivity company. But the gamification concepts I’ve talked about above, can very well be used by other vendors, within the area of productivity.

There’s ample room (and vast potential) for time management software to be so much more than just your average GTD / Getting Things Done productivity app, like OmniFocus, Wunderlist, Things or similar run-of-the-mill productivity software.

(Side note: please don’t “go GTD” – it’s a toxic productivity system. Go kanban light with Trello instead – to have more fun and be more productive!)

The best time tracking tool I’ve come across, is RescueTime, which I’ve used for a few years now.

RescueTime on your computer is to your productivity like a Fitbit on your wrist is to your fitness and health. It automatically tracks your activity.

The automated, no interaction needed, ever-present tracking is what’s key to RescueTime’s immense usefulness as an “anti-procrastinatory” time tracking tool.

How about a RescueTime challenge?

As the above indicates, a lil’ dose of healthy competition is… healthy… and helpful to your productive well-being:)

We can certainly all help each other be more productive and effective at work!

Wouldn’t it be great If the RescueTime team could build a Productivity Challenges feature?

Letting you challenge your RescueTime friends (or colleagues/team) to see who’s most productive during the challenge workweek?

I think it would be SO cool to challenge Heidi on that one! We both find ourselves procrastinating the important work till late in the afternoon, which leaves less time for movies, massages, walks, talk, and what else generates extra energy for the following days work tasks.

So here’s my open feature request for RescueTime:

Only You (And You Alone) can make it happen!

I love RescueTime so I’m crossing my fingers, hoping they’ll do it!

PS: If you haven’t tried RescueTime already, and especially if you don’t know where your computer-time is going, you really do owe it to yourself to try out RescueTime! (it’s free!)

I welcome your comments on this, so comment below! And feel free to share this blog post with your network and tag the RescueTime developers (on Facebook or Twitter) to let them know you agree with this feature request and want it too!