The Headway theme holds so much promise. It’s the only theme framework that really does deliver what it says on the box.

Using Headway, you can – in real life, not some upbeat marketing fantasy universe – design your own WordPress website, without coding.

That’s why I’m such a big fan of Headway and recommend it so often. BUT, Headway isn’t perfect, and there’s plenty to be improved upon.

The art of simplicity

I believe in simplicity and elegance, achieved through continuous refinement.

Headway 3.6 though, isn’t as much about refinement, as it’s about rewriting. Headway 3.6 is a major update, make no mistake about it. I don’t think any of the earlier 3.x updates has brought about as much change in a single update, as Headway 3.6.

The Design Editor, is all new. And the design editor is what this blog post is about. You see, it brings some much-needed solutions to some cumbersome challenges, most Headway-users will be glad to get rid of.

But while using the recent betas of Headway 3.6, I couldn’t help noticing that I wasn’t entirely happy. Something nagged me. Something didn’t feel right. And it was easy for me to put my finger on what felt wrong.

Want flexibility? Pay with complexity – at the cost of simplicity

Complexity had gone up. Usability gone down. I could see how my upcoming Headway video tutorial could become a more difficult course, for the participants to take. It’s extremely important to me, that the tutorials will be easy to understand, comprehend and follow. I wanna build your skills. Make you able to do stuff, on your own. 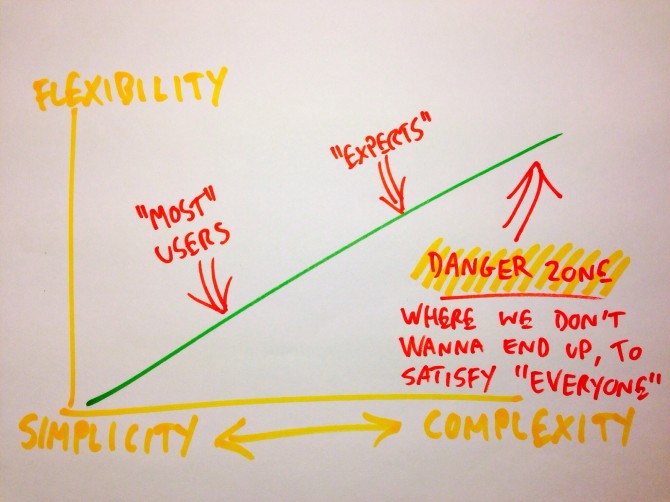 On a side note, the above illustration also highlights how some products end up being way too complex, succumbing to everyone’s specific feature wishes. I don’t think Headway is that troubled though;)

I’ve often wished for Headway Themes to release a Headway Lite version. One that keeps the best of Headway, while leaving out the advanced features, most people won’t really need. A “lite” or “core” version of Headway wouldn’t be a bad idea. A version catering to 80% of users needs, with roughly 20% of the complexity of the full, pro version. Hence the Pareto reference in the above headline.

Competitor Dynamik Skin Builder has a setting that can simplify the UI, by leaving out certain options like most padding and margin settings, to help pare down the complexity of its UI:

– and PageLines DMS has its open source version, and Pro (subscription) version.

Yet, I felt it would be a waste of time to start moaning about Headway 3.6’s direction. It’s apparent to me that Clay and the rest of the Headway team has already put a lot of effort, into making Headway 3.6 the ultimate, most supreme version of Headway ever.

Then, a few days ago, I had an enlightening Skype chat with Headway Themes’ lead developer, Clay Griffiths.

I decided with myself, that even though I didn’t feel like shaking things up, I had to voice my concerns, honestly and openly.

Fortunately, he was very interested in hearing what I felt could be done better and improved upon, in Headway. He also shared with me some very reassuring insights into some of the technical aspects of Headway 3.6, as well as the future of Headway. All of which makes me confident Headway has an ultra-bright future! That of course; makes me very happy to say:)

But as I told him, I’d rather write-up a blog post (this one) with my concrete, specific thoughts re: Headway 3.6 usability improvements. Reason is, I can go into more depth, and perhaps more importantly: I’d like your response! (whether you agree or disagree with me)

Without further ado and beatin’ around the bush; I’ll now share with you what I feel could have been done better, in Headway 3.6 – and will hopefully be fixed, sooner than later.

The first screenshot (click for a larger, 100% version) clearly illustrates my biggest issue with Headway 3.6 – namely the new design inspectors tendency to overwhelm, than give me clarity and a sense of overview.

I know the reasoning behind – and thinking that has gone into – the new design inspector. It aims to make it easier for the user to see where and how any given element was styled. A task that has sometimes been more difficult than it necessary, in previous versions of Headway.

And I welcome solutions to that challenge, but in all honesty – I can’t enjoy using the new design inspector. It isn’t elegant. It isn’t simple. It doesn’t offer clarity. Rather it makes me feel intimidated. The prime function of design: is to make life easier.

Please judge for yourself below – and let me know what you think and feel about this:

The intense density of Headway 3.6’s new design inspector, as can be seen above, is by far the biggest gripe I have with Headway 3.6. It makes my life as a web designer less fun – and more straining to my head, which I’d much rather devote to design and creative thinking.

Below, I’ll go into more detail with various other, mostly minor  (and a few major) issues I’ve come across in Headway 3.6:

It has taken me quite a few hours to thoroughly test Headway 3.6, make up my mind about these issues, annotate screenshots and write about it. Please realise I wouldn’t do that, if didn’t care deeply about Headway getting as great as it can possibly become.

Apart from the above critical remarks, it’s very clear to me, that the future is ultra bright for the Headway theme and community. So much good stuff is happening behind the scenes at Headway Themes, which will soon make it even more appealing for all users to be a part of.

But what do you think about the Headway 3.6 beta, and what I’ve shared with you here? Let me know!

PS: The Headway 3.6 beta can be downloaded at HeadwayThemes.com by all registered users.