I’ve been thinking lately… Social media marketing requires lots of thought. So much is happening, all the time, and we all try to stay afloat and gain more momentum, in our attempts to conquer the throne of “the interwebs”.

I often miss more meaningful analytics. I often think about how they can become more useful. More directly applicable. And truly meaningful. Raven Tools helps me “a bit” in that regard, but better analytics are still needed.

Especially when it comes to measuring social media marketing efforts!

Currently, Klout and similar “social media analytics tools” attempting to measure “social influence” are like the hit counters of 2013!

Have you counted your visitors lately?

Back in 1998 or so, long before the millennium, it was popular to have a hit counter somewhere down the bottom of your website, to let everyone know how many visitors your site had received, since some arbitrary date, on which you finally installed the counter on your site.

You see, back then we didn’t have Google Analytics. It was also way before Shaun Inman’s Mint. So a simple hit counter was all the web analytics we had! Apart from server logs, of course.

To shake things up – and have a blast – our hit counter could be downright funky though! Have a taste of this spicy selection: 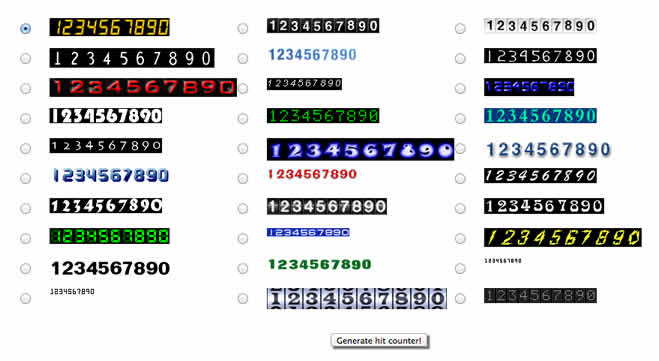 Oh, those were the days huh?

Klout influence score is the hit counter of 2013!

With Klout we see the exact same phenomena:
An early, haphazard, immature way of measuring something – in a way too convoluted, consolidated and unspecific way.

Honestly though, I can’t say that I do not enjoy seeing my Klout score go up. After all, it is rather low at 47 as of writing. But I don’t try to game my Klout influence score. Why on earth would I? That would make the score a measure more of my vanity than my social influence.

I use Klout for two things:

2. to motivate me to tweet and engage better and more often.

And when my Klout score goes down, I use it as a wakeup call and groin-kick to get me back up on the horse. Be more relevant and useful. That’s always the best course going forward, in online marketing.

Klout has its use as a rough (as in: very rough!) gauge of your own or someone elses influence in the online, social media sphere. No more, no less. Klout is for fun. Nothing else.

The future of social media analytics

I’m not saying social media analytics tools like Klout won’t grow up at some point. But more innovation and maturation is strongly required, before they’ll be deemed useful.

Innovation is happening though! Search engine optimization experts Moz (formerly SEOmoz) earlier this year introduced their own take on a social media analytics tools – and more specifically; their own take on a Klout-killing social media influence score:  Social Authority. A metric aimed squarely at Klout. Using a scale from 1-100, just like Klout, but of course using a different algorithm, and with an important distinction: Moz Social Authority only takes Twitter into account.

Limiting and focusing it on one social media service is a good idea, in my opinion. Klout score feels arbitrary and skewed because there’s no standard for which service(s) it’s using. That all depends on which services you connect it to.

Some competition in the social media analytics space is very welcome. Especially coming from Moz – they usually set the bar high, right from the start.

We aren’t there yet!

I’m sure that in 2023 some weird blogger with glasses (like me… or an older me even…) will write a post like this one. Ridiculing some fancy new online marketing tool, by comparing it… to todays implementation of Klout influence /  social media analytics scoring.

Yes. I am certain. In 10 years: We will be laughing at how dumb and meaningless Klout score was!

We need to find better ways to measure social influence:

First, we need to find new ways to segment influence.

Secondly, we need to focus a lot more on:

I think online reputation management is where social analytics gets really interesting! There’s no reason being an influential asshole, right?

Or what do you think? How can we measure social influence better?
What would make your dream social media analytics marketing dreams come true?