You do want a fast website, right? Most of us do. 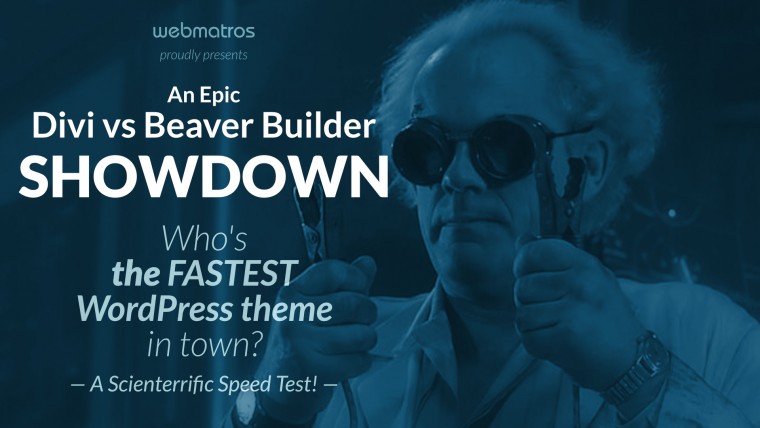 It’s with great pride that I hereby welcome you to the fully updated and revised Divi vs Beaver Builder WordPress theme speed test!

Note: for reference, I’ve archived the 2016 version here, as a PDF you can download should you wish. 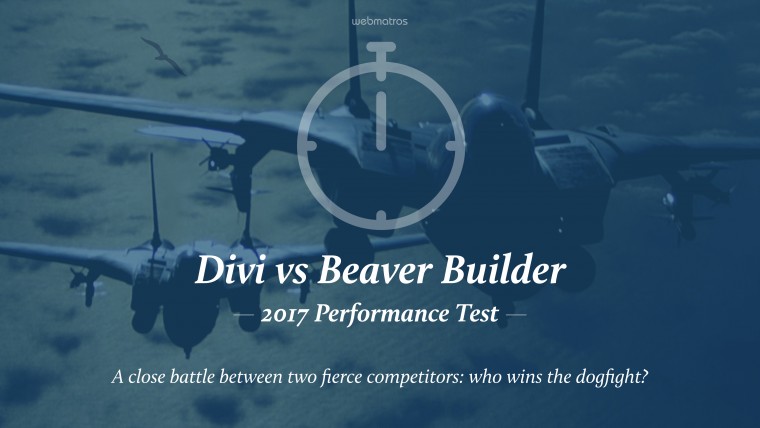 To speed up WordPress, it’s essential to use fast WordPress themes and plugins. We can’t optimize WordPress itself much – and don’t need to: it’s a decently well-oiled website platform. Instead, focus on what’s running on top of WordPress, as slow themes and plugins are the usual suspects (and almost always convicted felons – guilty as charged) when your website speed grinds to a halt.

Sure, there are plenty fast WordPress themes around. The standard themes that come with WordPress on installation; Twenty Ten, Twenty Eleven, Twenty Twelve, Twenty Thirteen, Twenty Fourteen, Twenty Sixteen, Twenty Seventeen: all are fast-loading WordPress themes – and I’m sure Twenty Eighteen will be too. But their speed is at the expense of flexibility. These aren’t webdesigner-in-a-box drag’n’drop themes. They’re cool, but unflexible.

What if we want the best of both worlds: fast and flexible?

I’ve previously reviewed the Divi theme by Elegant Themes, as well as the Beaver Builder plugin – and its optional partner-in-crime: the perfectly matching Beaver Builder theme.

Divi and Beaver Builder has taken the WordPress-world by storm. They both let anyone design unique websites, via real, honest-to-God drag’n’drop – zero coding required.

Yet, such ease-of-use and WYSIWYG (what-you-see-is-what-you-get) features usually come at the cost of performance. “Easy to build, slow to load” used to be the norm, before Beaver and Divi entered the scene.

And make no mistake about it: Divi and Beaver Builder are competitors. Arch-rivals. Like Nate Diaz and Conor McGregor. If you’re into MMA you’ll know what I mean. And like Nate and Conor, Divi and Beaver are two quite different contenders – both from a technical standpoint and in actual combat.

In my Divi review it’s clear that I prefer Beaver Builder over the Divi theme, for technical and usability reasons. The infamous Divi theme is impossible to ignore though! It’s astronomically popular.

Will the fastest WordPress theme please stand up?

That’s exactly what I myself wanted to know! So I put on my vintage, authentic Doc-suit, and set up a scienterrific WordPress theme speed test – an EPIC speed-battle of the giants – to find a valid, concrete answer to this; the question of questions…

Which is the fastest WordPress theme: Divi… or Beaver?

Ready for take-off Marty? Alrighty then: let’s go… to the future! (it holds the answer – and in a few minutes you’ll have it t00) 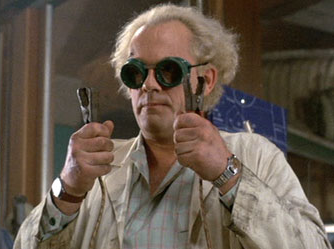 How I did this speed test

Before we dive into the numbers, please let me share with you how the test was set up, to give you an idea of the large amount care and effort I’ve put into getting reliable, trustworthy, real-world results.

First up, the version numbers for the current test:

Beaver Builder is a stand-alone page builder plugin which can be used with any theme. In this test it was used with its complementary Beaver Builder theme, one which I highly recommend: it’s simple, yet powerful. Strikes a good balance between flexibility and ease-of-use.

The Divi theme was installed as… well… a theme! Side note: Divi is now also available as a stand-alone page builder plugin, just like Beaver Builder is, further emphasizing the fierce competition that these two ferocious contenders are in.

No irrelevant plugins were active in either test, btw.

Note that the headline above says equal and similar– not identical sites.

The two test sites were designed to be technically similar, not identical design-wise.

I created two similar one-page sites (aka: landing pages) equal in functionality and features – one with the Divi theme – and the other with the Beaver Builder plugin + theme combo.

You can peruse the two test sites here:

Yup, neither are design beauties: none of them will win a beauty contest:)

To smooth out the results fairly, I made an elaborate page layout, using as many features/modules of each theme as possible. This way, one particularly weak (slow) module couldn’t skew the results unfairly.

And it goes without saying: to compare them directly face-to-face, I only used features available in both Divi and Beaver Builder, so I could build two sites that are technically identical, not pixel-perfect identical (design has no influence on the test results).

To ensure accuracy of the P3 Profiler and WebPagetest results, I took 5 samples of each test, then calculated the average score, to compensate for server and network fluctuations.

Although individual database queries can be fast, and others slow, the total number of queries required for the page to load gives us a good idea as to how loading the site impacts the server, specifically the database.

As a dynamic CMS (content management system), WordPress stores all content (except static resources like images, PDF’s and other media files) and your site’s settings in a MySQL database. Every time a page on your site loads, WordPress calls up stuff from the database. Logically, the more times WordPress does so to build the page, the longer it will potentially take. WordPress core + plugins + themes: they all query the database.

Likewise, the Divi theme & Beaver Builder both store their page layous and other design options in your database.

The more complex the theme or plugin, the more queries it will likely use. Plugins like WooCommerce and WPML (especially with their many add-ons/extensions) are two particularly query-greedy bastards.

So, while this metric doesn’t necessarily correlate with actual load time, it gives us a good idea about the potential impact on our server. You want a theme that’s gentle to your server. If your theme is pounding the server with tons of queries, your site will be more likely to go down when your site goes viral and receives a heavy traffic-spike.

Interestingly, Divi 3.0 has reduced its use of database queries to half the amount it required in 2016 / version 2.0. That’s impressive, no matter how they’ve accomplished it! Could be some beefed-up built-in caching – or seriously optimized code. Either way, I’m impressed.

However… the real question is: has Divi 3.0’s significantly reduced use of database queries also had a significant impact on performance? We’ll look at that shortly, but first, let’s talk take a quick look at memory usage.

Some shared hosting plans has memory limits set as low as 8 MB. WordPress themes and plugins all increase WordPress’ memory use. WooCommerce will at a minimum require around 40 MB, but really needs 64 MB and upwards, in order to run properly, based on my own experience. Likewise, themes like Divi and Beaver Builder want a chunk of your memory too. So it’s interesting to see how each of them impacts peak memory usage.

In the report, you’ll see that Divi is using 26% more memory than Beaver Builder.

Now it’s time to delve into the real performance speed tests. I used three different tools to measure the page speed, namely: P3 Profiler, Pingdom, and WebPagetest. The latter is new to my arsenal. Alan Bleiweiss was critical of Pingdom when someone shared the test results of my previous test (Fastest WordPress Hosting 2017) on Twitter:

I have done many tests. Pingdom rarely matched slow pipe users as tracked by Google analytics the way WebPageTest does.

I'll keep that in mind for the next test I do. Thanks for pointing it out and elaborating, Alan!

True to my word, I’ve included WebPagetest too, in this new speed test.

Let’s get started (be sure you’ve downloaded the report above!)

P3 Profiler is a WordPress plugin that measures the full impact of plugins and themes, on your whole site – the WordPress admin included. It’s an oldie but goodie.

Winner: Divi beat Beaver by being 17.5% faster in this test.

Pingdom’s most realistic performance test of real-life page load speed. It’s the average of many tests run throughout a full month.

Still, the infamous Divi theme runs with the prize:)

Looking at Response Time, as measured by Pingdom from a pool of worldwide servers: Divi beats Beaver by 11%.

My guess is this is due to Divi’s drastically reduced database query needs, making it faster at serving the page.

I will however quote WebPagetest’s own words about their Speed Index metric, their most reliable, real-life’ish page speed test:

The Speed Index is the average time at which visible parts of the page are displayed. It is expressed in milliseconds and dependent on size of the view port.

The Speed Index metric was added to WebPagetest in April, 2012 and measures how quickly the page contents are visually populated (where lower numbers are better). It is particularly useful for comparing experiences of pages against each other (before/after optimizing, my site vs competitor, etc) and should be used in combination with the other metrics (load time, start render, etc) to better understand a site’s performance.

The speed index takes the visual progress of the visible page loading and computes an overall score for how quickly the content painted. To do this, first it needs to be able to calculate how “complete” the page is at various points in time during the page load. In WebPagetest this is done by capturing a video of the page loading in the browser and inspecting each video frame.

Performance-wise, the infamous Divi theme wins over Beaver Builder. Divi is slightly faster than Beaver, though not by a huge margin.

Both the Divi theme and the Beaver Builder plugin + theme combo are both fast loading WordPress themes. Whether you run one or the other, your page load speed won’t suffer.

This leaves the final choice up to you, and I suggest you make your pick based on usability considerations and personal preferences. A WordPress theme is a crucial part of a WordPress website – so much of your site’s capabilities and functionality comes from the theme – not WordPress. So pick the one you feel most confident in – and with.

Usability-wise, I’m certain that most people will find Beaver Builder easier to use, than Divi. Beaver Builder rocks! Even with the huge usability improvements Elegant Themes introduced in their groundbreaking Divi 3.0 release. 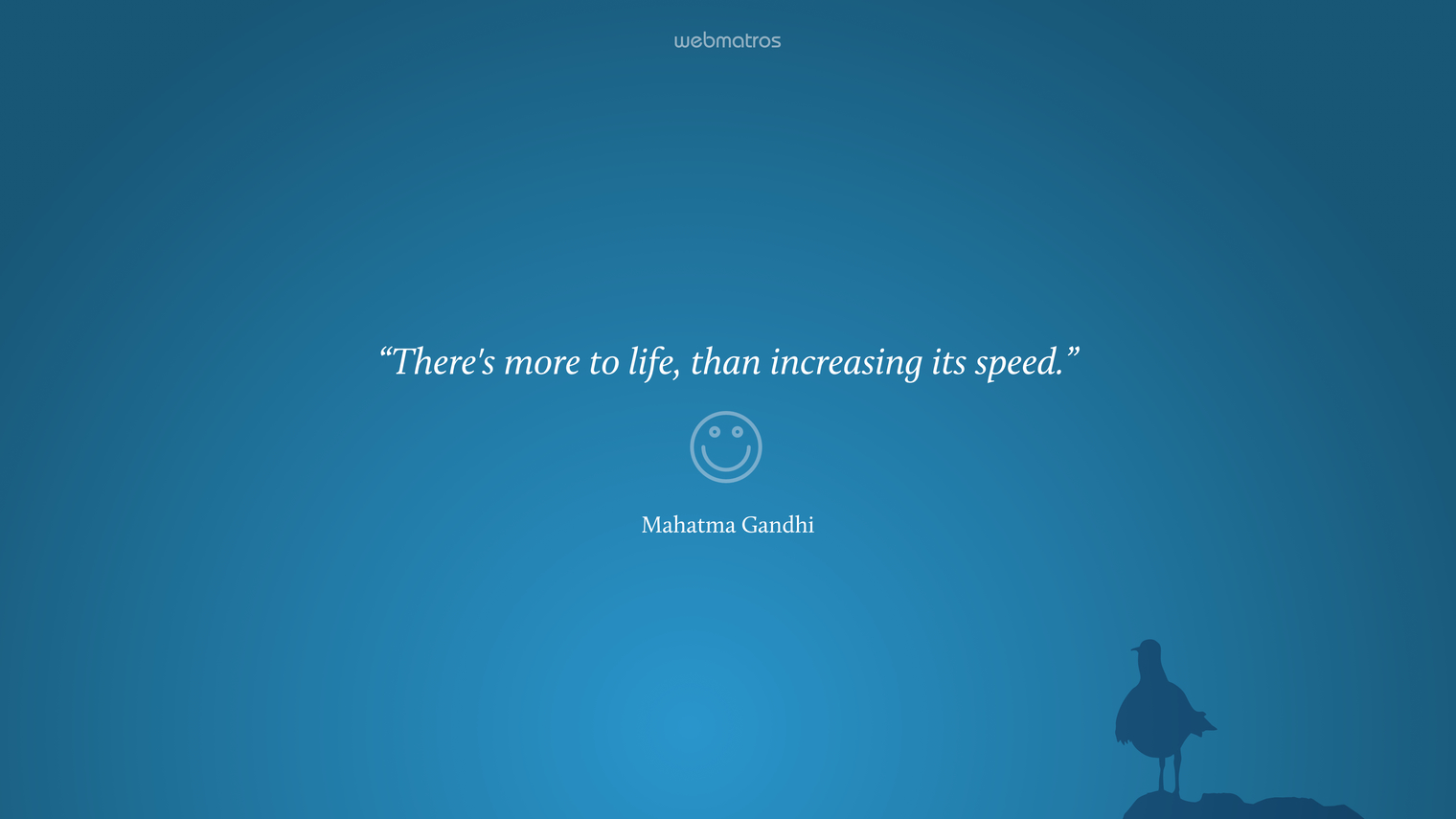 Thank YOU for reading! Please share – and add your voice below!

I spent a lot of time and energy setting up this test, executing it, and writing up the results. If you liked reading it, I highly encourage you to share this post with your network (right now). To do so, please use the sharing buttons! (over on the left) – thank you mate!

If you have questions or comments, do not hesitate to use the comments section below!